IT IS TRANSLATED VERSION OF ORIGINAL ARTICLE PUBLISHED IN LOCAL NEWS PAPER DIVYA BHASKAR IN GUJARATI LANGUAGE ON 26/05/2011.

CXLARIFICATIONS :AT THE END OF RESEARCH I FOUND HASTING AND SAXONS HAVE CONNECTION WITH INGVAEONIC (INDRA) TRIBES. AND SAXONS DERIVED THIER NAME FROM ONE OF THE NAMES OF INDRA THAT IS “SAKSANAYE”.

In historical terms, Hastings can claim fame through its connection with the Norman conguest of England. The first mention of Hastings is found in the late 8th century in the form Hastingas. This is derived from the Old English tribal name Hæstingas, meaning “Hæsta’s people”, “the family/followers of Hæsta”. Symeon of Durham records the victory of Offa in 771 over the Hestingorum gens, that is, “the people of the Hastings tribe”, and the same tribe gave their name to Hastingleigh in Kent. The place name Hæstingaceaster is found in 1050, and may be an alternative name for Hastings. However, the absence of any archaeological remains of or documentary evidence for a Roman fort at Hastings suggest that Hæstingaceaster may refer to a different settlement, most likely that based on the Roman remains at Pevensey. 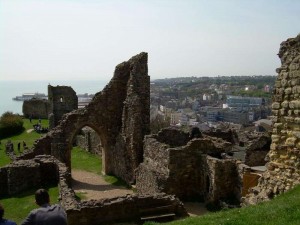 The Kingdom of Haestingas
From the 6th century AD until 771, the area around modern-day Hastings, as the territory of the Haestingas tribe, considered itself to be a separate Kingdom from the surrounding Kingdoms of Suth Saxe (“South Saxons”, i.e. Sussex) and Kent, and attempted to retain its separate cultural identity until the 11th century.
Link to kingdom of Haestingas
The Norman -derived equivalent “count” was not introduced following the Norman Conquest of England though “countess” was and is used for the female title…The Irish, Scottish Gaelic, and Welsh words for “count” or “earl” (Iarla in Irish and Scottish Gaelic, Iarll in Welsh) are all descended from English “earl” or one of its ancestors.
English and Scottish: habitational name from Hastings, a place in Sussex, on the south coast of England, near which the English army was defeated by the Normans in 1066. It is named from Old English Hastingas ‘people of Hesta’. The surname was taken to Scotland under William the Lion in the latter part of the 12th century. It also assimilated some instances of the native Scottish surname Harestane Its English variant is Hasting.

A count is a nobleman in European countries; his wife is a countess. The word count came into English from the French comte. The Irish term for Count was Cunta ,while Italian form was Conte or Contesaa. The origin of word kunta, kunte is there in Germanic word “kunton” .
Link to word count
Aisa bhi Hota hai? 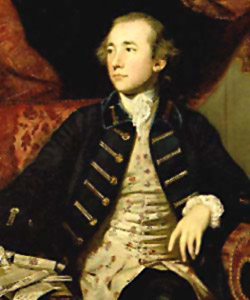 Hastings, Warren (1732-1818) was Governor (1772-1774) and Governor General (1774-1785) of the fort william in Bengal. Warren Hastings abandoned the policy of hesitation of his predecessors about the question of establishing political dominance in India, and bringing about a series of reforms and waging wars against the challengers to his expansionist plan and conquering new lands. He laid the foundation of British power in India.
Link to warren Hasting
He was at Kasimbazar in 1756 when Nawab sirajuddaula was provoked to attack and storm Calcutta, rounding up the British at Kasimbazar in the process. On his release Hastings joined the British refugees from Calcutta. He married one of them, Mary, widow of an officer who had been killed at Calcutta. During his rule in Awadh. Warren Hassling insisted and made possible translation of Bhagwad Gita by charles Wilican and he (Hasting) wrote preface to the book himself.
From 1758 Hastings served as the company’s Resident at Murshidabad with the new nawab, Mir jafar, in whose favour the British had intervened at Palashi. In 1760 a coup engineered by the British brought down Mir Jafar and replaced him with another nawab, Mir qasim. Aisa bhi hota hai?

Some more clues………………..
The Parisii (or Quarisii) tribe / Pariskhit (King of the Kurus)

The Parisii (or Quarisii) were a celtic iron age people that lived on the banks of the river Seine (in Latin, Seguana) in Gaul from the middle of the third century BC until the Roman era. With the Suessiones, the Parisii participated in the general rising of Vercingetrox against Julius Caesar in 52 BC.

Their chief city (oppidum) was on the site of Lutetia, which later became an important city in the Roman province of Gallia Lugdunensis and ultimately the modern city of Paris. (The name Paris is derived from Parisii).
Barry Cunliffe in Iron Age Communities in Britain (1974) p. 45, distinguishes the Parisii as those in the Nanterre-Paris region, and the Parisi as those who moved to Britain, based on Ptolemy’s descriptions.

Paris has many nicknames, but its most famous is “La Ville-Lumière” (“The City of Light” or “The Illuminated City”) a name it owes first to its fame as a centre of education and ideas during the Age of Enlightenment, and later to its early adoption of street lighting. Since the mid-19th century, Paris has been known as Paname (panam) in the Parisian Slang called Argot (Moi j’suis d’ Paname, i.e. “I’m from Paname”). The singer Renauld repopularized the term amongst the young generation with his 1976 album Amoureux de Paname
(“In love with Paname”).
Paris’ inhabitants are known in English as “Parisians” and in French as Parisiens (Pagizis)). Parisians are often pejoratively called Parigots (Parigo ),a term first used in 1900 by those living outside the Paris region.
The earliest archaeological signs of permanent settlements in the Paris area date from around 4200 BC. The Parisii, a sub-tribe of the Celtic Senones (Sur saini Of Mathra? To which tribe Porus belonged?), inhabited the area near the river Seine from around 250 BC.

And now about Parikshit…..

Parikshit was a mythical Kuru king, who succeeded Yudhisthira to the throne of Hastinapur, according to the Mahabharata and the Puraans. He was the grandson of Arjuna and the son of Abhimanyu and Uttara. His bodily existence ended due to the curse of a Brahmana, which used the Naga king, Takshaka, the ruler of Takshashila as the instrument of death. Parikshit succeeded by his son Janamejaya. According to the Mahabharata, he ruled for 24 years and died at the age of sixty. 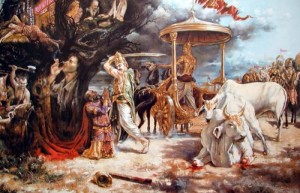 Etymology
His name came from the Sanskrit verb root pari-ksi = “around-possess” (or, less likely here, “around-destroy”). An alternate suggestion from Poet Nirala’s translation is Pariskhit means the one who has been tested (The test (Parikhsha) being of coming back from death by efforts of Krishna.
Alternate modern, not all of them correct as regards the original Sanskrit, spellings of his name are Pariksita, Pariksit, Parikshat, Parixit, and Parikshita. His name is a common Hindu name across India today.
He was also referred to as the “King of the Kurus”.

Parikshit was the son of Uttara, the Matsya princess and Abhimanyu. Abhimanyu was the son of Arjuna and his Vrishni queen Subhadra. He was born only after the end of the Kurukshetra War.
Uttara was carrying their son in her womb when Abhimanyu was mercilessly and unfairly slain by the Kaurava. Later, Ashwathama attempts to kill the unborn child and his mother by directing the Bhrama-Sheer Astra towards her tent off the battlefields. She is saved by Lord Krishna, who was also the maternal uncle of Abhimanyu (Arjuna’s wife Subhadra was the sister of Lord Krishna and mother of Abhimanyu.

Hastinga people have their own culture and songs. There are so many lyrics of Hasting culture. Here I am posting one of it.

Saxons is one of the Angle tribe.

The Saxons were originally ingvaeonic tribes, whose earliest known area of settlement is Northern Albingia, an area approximately that of modern Holstein. This area overlapped the area of the Angles, a tribe with which they were frequently closely linked. Saxons participated in the Germanic settlement of Britain during and after the fifth century. It is unknown how many migrated from the continent to Britain, though estimates for the total number of Anglo-Saxon settlers are around two hundred thousand. During the Middle ages, because of international Hansaetic trading routes and contingent migration during the Middle Ages, Saxons mixed with and had strong influences upon the languages and cultures of the North Germanic and Baltic and Finnic people, and also upon the Polabian slavs and Pomeranian west Slavic people.

England, in Gàidhlig, is Sasainn (Saxony). Other examples are the welsh Saesneg (the English language),Irish Sasana (England), Bereton saoz(on) (English, saozneg “the English language”, Bro-saoz “England”), and Coernish Sowson (English people) and Sowsnek (English language), as in the famous My ny vynnav kows Sowsnek! (I will not speak English!).
During Georg Friiederich Handel’s visit to Italy, much was made of his being from Saxony; in particular, the Vemetians greeted the 1709 performance of his opera Agrippina with the cry Viva il caro Sassone, “Long live the beloved Saxon!”

Link to Shah rulers of Uttarakhand

Link to Kabulshahi in Afghanistan

If we refer Indra sahsra manawali then we shall find name – “Saksanaye” – (a Companion b) Vanquisher .

At last we have found real roots of saxons..they have roots in Seshnchalam…..Vatican (Venktesh) and Sacnta sedes….is clue to world History.
In Germany seshanchalam turned to Sachsen Anhalt and In Britain it turned to Saxons…!