(It is translated version of article published in Local news paper Divya Bhaskar on 14th April, 2011) 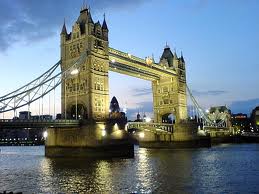 London is an ancient name and can be found in sources from the 2nd century. It is recorded c. 121 as Londinium, which points to Romano-British origin.
According to the legendary Historia Regum Britanniae, of Geoffrey of Monmouth, London was founded by Brutus of Troy after he defeated the incumbent giants Gog and Magog and was known as Caer Troia, Troia Nova, which, according to a pseudo-etymology, was corrupted to Trinovantum. Trinovantes were the Iron Age tribe who inhabited the area prior to the Romans. Geoffrey provides prehistoric London with a rich array of legendary kings, such as King Lud.

Richard Coates put forward an explanation in 1998 that it is derived from the pre-Celtic Old European *(p)lowonida, meaning ‘river too wide to ford’, and suggested that this was a name given to the part of the River Thames which flows through London; from this, the settlement gained the Celtic form of its name, *Lowonidonjon. 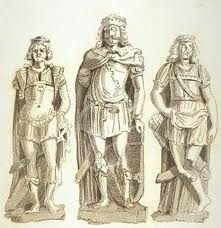 king lude who founded London (with his two sons)

The etymology of the name of the city of London has been the subject of speculation for centuries. There are many theories for etymology of the word.
Some think that the name derives from an Old European (pre-Celtic) name Plowonida, from Indo-European roots plew.
, with the suffix -on-jon, in either Old European or Celtic times, giving (p)lowonidonjon. Indo-European /p/ regularly disappears in Celtic, so this word would have gone through *Lowonidonjon and either *Loondonjon or Lonidonjon to Lundonjon and hence Lundein or Lundyn. In wales language it was pronounced Lou-nd-e-njo-m.

Link for – Lou-nd-e-njo-m
This details described by wikipedia.
Now let us take clues out of this descripton..
In above description Trinovantum or Trinovantes is sanskrit term. If we look at the word “Lau” then Behindthename.com explains that Lau is Germanic word which stands for Great warrior. When We find sakskrit word like “Trinovanes” , then It should not be “Lau-nandan” there ? In fact we could not spell out the word Deutsche(Devashch) in the word Dutch. We could not read or spell out the word “Lawishch” in the the word Louis. 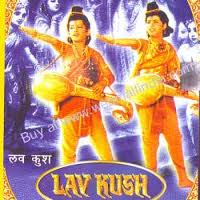 Ramayana first of all sang by Lau -kush

At the end of the research I conclude that They remembered Landhour ..The place from where their ancestors migrated towards west.They were called Scythians (Archers) in European terms. Their ancestors named “Lowonidonjon” on British Land.

Lal Tibba (La Tene ?) , the highest point in hill town of MUssoorie . Located in Landhour area, which is the oldest inhabited place in Mussoorie. Landhour still carries style of British era and it was here that Britishers first settled. The buildings, and their architecture, everything over here seem to be telling a tale of an English past.

Link
Lal Tibba This location is highest point in Mussoorie. Lal Tibba is located in Landhour
location which is the oldest inhabited place in Mussoorie.
Link

Landour (also Landaur), a small Cantonment town contiguous with Mussoorie, is about 35 km (22 mi) from the city of DEhradun in the northern state of Uttarakhand in India. The twin towns of Mussoorie and Landour, together, are a well-known British Raj -era Hill station in northern India. Mussoorie-Landour was widely known as the “Queen of the Hills”. The name Landour is drawn from Llanddowror, a village in Carmarthenshire in southwest Wales. During the Raj, it was common to give nostalgic English, Scottish, Welsh or Irish names to one’s home (or even to British-founded towns), reflecting one’s ethnicity. Names drawn from literary works were also common, as from those by Robert Burns, Walter Scott, Thomas Hardy, Robert Louis Stevenson and many others.
Link to Landour
RiverTamas of Garhwal not far away from Landhour.
Link to Tamas
————-
Soul of Lav nandan = Lowonidonjon = London

London carry larger than epic story ,but people started considering it as mere mythology only. Most people know and believe that London / Lowonidonjon has origin in Rome.But real truth is larger than that historical line.For ages people remained busy to meet their own selfish ends only. With their selfish blindness they could feel glory of London,but failed to read pain of London. They even lost clue to shining diamond (that world know as kohinnor today) in crown,epic crown.We can not read that as Kohinnor (It is not original name of diamond) belong to this land , same way Lav nandan who stay in London also belong to this land of Ganga too. Then how can we feel ocean of pain behind that bold shinning.., The pain ….that frozen like stone Henge?Misunderstanding , illusions and misdeeds covered London/ Lowonidonjon with more and more darkness.