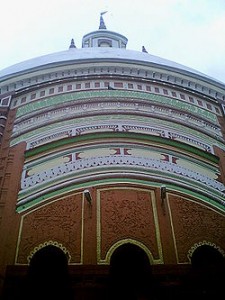 Tarapith is a small temple town near Rampurhat in Birbhum district of the Indian state of West Bengal.The name Birbhum comes probably from the term Land (Bhumi) of the Brave (Bir).
Geographically, this area lies at the north eastern end of the Chota Nagpur plateau, as it slopes down and merges with the alluvial plains of the Ganges. The western portion of the district is historically known as Vajjabhumi or Bajrabhumi .

Vajjabhumi or Bajrabhumi- Björneborg – Birkaland
Vajjabhumi is also included in the Rarh region, and rest of Rarh is called Sumha to differentiate it from Vajjabhumi.
There is Pori (Swedish: Björneborg) city and municipality on the west coast of Finland. The city is located some 15 kilometres (9 mi) from the Gulf of Bothnia, on the estuary of the Kokemäenjoki river, which is the largest in Finland. Pori is the most important town in the Satakunta region
There is Pirkanmaa (Swedish: Birkaland), or the Tampere Region (official English name), is a region of Finland. It borders on the regions of Satakunta, Tavastia Proper, Päijänne Tavastia, Southern Ostrobothnia and Central Finland.
The mentioned pori town and Pirkanma towna were part of ancient Tavastia region.