There was …… or There is Ram…There was Kartikeya or there is Karftikeya?

Now we also find Badgurjar or Bargujar ancient Suryvanshi Rajput tribes of India. Unfortunately we never look to these facts. Burgujars are among the most revered rajputs of ancient India. The Badgurjar, or the “Great Gurjars”, are not to be confused with the common place shudra gujjars as the former are the authentic rulers and the people whom they conquered were labeled as gujjar. They constituted the main force in Haraval Tukdi or the first line of offence in any battle. The Badgujars chose to die rather than to submit to the supremacy of the Muslim kings. Many bargujars were put to death for not giving their daughters to Muslim rulers. Some Badgujars changed their clan name to Sikarwar to escape mass genocide carried out against them.
Bargujar sub-clans are khadad, madadh, taparia, lawtamia.

Ya, Burgundy was Duchy in Low countries .In the history of the Low countries, the Burgundian Netherlands refers to a number of Impirial and French fiefs ruled in personal union by the House of Valois – Burgundy and their Habsburg heirs in the period from 1384 to 1482 . The area comprised large parts of present-day Belgium and the Netherlands, as well as Luxembourgh and parts of northern France.

Now We know something about Brussels , let us know something about Baruali.Barauli Rao Village is 25 km distance from Aligarh.A Badgujar Rajput King Raja Pratapsingh married the daughter of Raja Door and populated the town of Barauli in Samvat 1122 (1065 A.D.) when there were 1656 villages attached to Barauli State. He got 156 villages in dowry from Dor king to marriage his daughter. The Hindu Rajas or Raos of Barauli, belonging to Bargujar Rajput clan claim to have descended from the Solar Dynasty. Raja Nityapal, a remote ancestor of the family, left Ayodhya and took possession of Kathiawar. But his descandat Raja Sadasen had to leave Kathiawar and migrate to Benares ,where he founded a principality of his own and he and his descendants ruled over the territory for several centuries. They were called Katharya Rajputs as they had come from Kathiawar. Raja Rajdeo of Solar race, who ruled at Macheri.The grandson of Rajdeo married a sister of Prithirai and their son was Raja Pratap Singh. There is one village named Barauli in Kannauj district too.

In the Hindu epic Ramayana, Bharata (Indonesia: Barata,Chinese: Boloto, Burmese: Bhadra, Malay: Baradan, Tamil: Paratan, Thai: Phra Phrot) was the second brother of the main protagonist Rama, and the son of Dasaratha and Kaikeyi. Dasratha was the Emperor of Ayodhya and belonged to the suryavansha or Solar dynasty. It is said that after Rama, he was the symbol of Dharma and idealism. A few commentators, however, deem Bharata to be even greater than Rama himself in virtue. 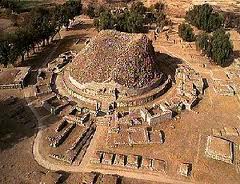 Taxila named after Taksha -Son of Bharat (brother of Ram)

He is considered to be born in the aspect of the Sudarshan Chakra, the most famous of Vishnu’s Panchayudhas.
It is also known that Bharat conquered the Gandhara and created his kingdom of Takshasila comprising present day, Punjab region, Pakistan, Afghanistan and parts of Central Asia. It is evident by the Uzbek capital city’s name Tashkent that it is derived indeed from the word “Taksh-khand” named after Bharat’s son Taksh. The present-day Pakistani city of Taxila is also a mark of his rule. Pushkalavati, which is present day Peshawar was named after his second son Pushkal.

It is believed that present day Lahore was founded by Lau , son of Ramchandraji. Indian ancient scripture keep this sort of record. Ramvanshis reached up to (present day )Tashkant in same generation. Our record stops there. But in following generation Lau – kush vanshis and Bharatvanshis may have not reach far beyond? Our history is silence after Taxashila and Lahore. We stoped there . Have we not kept further history?.In very first generation after Ram they reached up to Tashkant . They might have not gone further in next generations?

Link for Lawya town in Russia
We do not resisit or protest the said theory of Aryan Invasion . Then we donot believe in our scriptures ? Our scripture says different story. While present day History impose therory of Aryan invasion on us. New facts of present research can strangthen our ancient record which is not fake at all.

Will you permit me to change the Book name?

Now will you permit me to change the name of the Book? I am waiting for your permission. I Think that appropriate name will be There Is Ram. But I promise you I will not change the title of the book until I get your permission. We have reached half path of the book. Still more there. Shortly we shall look at “Great Raid” . turning point of world history as well as history of Bharatvarsha.