Troy (Hittite: Wilusa or Truwisa;Greek:Troia; Latin: Troia and Tlium; Turkish: Truva) was a city, both factual and legendary, located in northwest Anatolia in what is now TUrkey, southeast of the Dardanelles and beside Mount Ida. 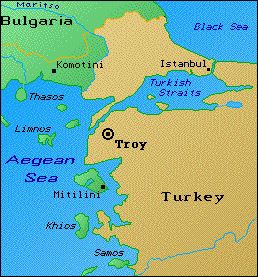 Troy was in Anatolia. It was also pronounced "Truwisa"

It is best known for being the setting of the Trojan War described in the Greek Epic Cycle and especially in the Iliad, one of the two epic poems attributed to Homer. Tauras Mountains are there in Anatolia. The Origin of River Yufretis and Taigris is also in Anatolia.
Trojan War
(1194–1184 BC)
In Greek mythology, the Trojan War was waged against the city of Troy by the Achaeans (Greeks) after Paris of Troy took Helen from her husband Menelaus, the king of Sparta. The war is among the most important events in Greek mythology and was narrated in many works of Greek literature
, including the Iliad and the Odyssey by Homer. The Iliad relates a part of the last year of the siege of Troy, while the Odyssey describes the journey home of Odysseus, one of the Achaean leaders.

Druhyu and his descendant are believed to have formed the Twipra Kingdom.
Twipra Kingdom (Sanskrit: Tripura, Anglicised: Tippera) was one of the largest ancient kingdom of the Tipra people of the Bodo -Kachari ethnicity in the Northeastern region of the Indian subcontinent having a chronicle of 186 Kings till the present times (Maharaja Pradyot Kishore Manikya, better known as Kirit Pradyot Deb Burman. Scientists have pointed out that the Bodo -Kachari group of people migrated from south china via Tibet to present areas of North –Eastern India and Bangladesh well before the 1st century B.C when Budhuism was formally introduced to china because the BOdo -Kachari people show no trace of Buddhism.

The Bodo-Kachari people gradually settled into the present areas and formed the communities of the Bodo , Kachari, Garo ,Tipra ,Dimsa,Koch peoples. The Tripuri , , Sutiya and Dimsa had established powerful kingdoms in the past. The Tripuri kings had even defeated the Mughuls and the Burmes kingdoms in the past. Today, the Bodos, the Tripuris and the Garos have established a strong political and ethnic identity and are developing their language and literature. The Sonowal Kachari are also a branch of Bodo-Kachari. They live in the districts of Dibrugarh, Tinsukia, Dhemaji, Sivasagar, Lakhimpur, Golaghat and Jorhat.

Genos (plural gene= “clan”) was the ancient Greek term for kind; race; family; birth; origin which identified themselves as a unit, referred to by a single name (see also Sanskrit “Gana“). Most gene seem to have been composed of noble families—Herodotus uses the term to denote noble families—and much of early Greek politics seems to have involved struggles between gene. Gene are best attested at Athens, where writers from Herodotus to Aristotle dealt with them.
Early modern historians postulated that gene had been the basic organizational group of the Dorian and Ionian tribes that settled Greece during the Greek Dark Ages, but more recent scholarship has reached the conclusion that gene arose later as certain families staked a claim to noble lineage. In time, some, but not necessarily all, gene came to be associated with hereditary priestly functions.

The Achaeans were one of the four major tribes into which the people of classical Greece divided themselves. According to the foundation myth formalized by Hesiod, their name comes from Achseus, the mythical founder of the Achaean tribe, who was supposedly one of the sons of Xithus, and brother of Ion, the founder of the Ionian tribe. Xuthus ( or Jorhat?) was in turn the son of Hellen, the mythical patriarch of the Greek (Hellenic) nation.
Historically, the members of the Achaean tribe inhabited the region of Achaea in the northern Peloponnese. Unlike the other major tribes (Ionians, Dorians and Aeolians), the Achaeans did not have a separate dialect in the Classical period, instead using a form of Doric.

The Aeolians
The Aeolians were one of the four major ancient Greek tribes comprising Ancient Greeks. Their name derives from Aeolus, the mythical ancestor of the Aeolic branch and son of Hellen, the mythical Patriarch of the Greek nation. The Boeotians, a subgroup of the Aeolians, were driven from Thessaly by the Thessalians and moved their location to Boeotia. Aeolian peoples were spread in many other parts of Greece such as Aetolia,Locris,Corinth,Elis and Messenia.

The Garos are a tribal people in Meghalaya, India and neighboring areas of Bangladesh, who call themselves A•chik Mande (literally “hill people,” from a•chik “hill” + mande “people”) or simply A•chik or Mande.They are the second-largest tribe in Meghalaya after the Khasi and comprise about a third of the local population. Achik –mande do not remind you of The Achaeans Greek tribes?

Link to Land of Achik -mande
I am providing second link to the book “Encyclopaedic profile of Indian tribes, Volume 1” By Sachchidananda, R. R. Prasad
Link to book

We also have to remember that Bodo –kashari kings were carrying title “ Kirit “Now let us look at Crete (Greek:Kriti) Island of Greece. Crete is the largest and most populous of the Greek islands, the fifith largest island in the Mediterranean Sea, and one of the thirteen Administrative regions of Greece. It forms a significant part of the economy and cultural heritage of Greece while retaining its own local cultural traits (such as its own Dialect,Poetry and Music). Crete was the centre of the Minoan civilization (c. 2700–1420 BC), the earliest “high culture” civilization in Europe, which built the first palaces in Europe.

Anu,son of Yayati gave rise to a Mleccha tribe, Tusharas (Tukharas, Tocharians), with their kingdom located in the north west of India as per the epic Mahabharat. (Mbh 1:85) Further on Kekaya, a warrior on the Pandava side into whose chariot Bhima got during the fighting on the sixth day. As per Bhagwat Puran the Usinaras, the Sibi, the Madras, and the Kekayas were the direct descendants of Anu. Sibi or Sivi is stated to be son of Usinara.

For your little entertainment I am providing you link to French artist Devyani. Look at it and enjoy.
Link