It is translated and updated version of an original article pulished in local news paper Divya Bhaskar on.03/08/2010

Link to original Article
The word Robert is clue to Ram. The original Indian word Bharat traveled upto far west . In Afghanistan it took the form of Berhat and that very word Berhat transformed to “Bert” in Europe. The prefix “Raw” itself suggest that Robert stands for younger brother to Ram. Historian Albiruni mentioned that Berhat dynasty ruled Capisa for 60 generations. Then we find Robertian dynasty in Europe. Hugh Capet took the title “Capacian”. That way he declared that he belonged to Capisa (Afghanistan).
Behind the name .com also explain the meaning of word “Robert”. It explains that The name has been borne by two early kings of France, two Dukes of Normandy, and three kings of Scotland, including Robert the Bruce who restored the independence of Scotland from England in the 14th century.Means name has its origin in Royal’s names. The explanation to pronunciation of word also gives clue to meaning. Behindthename.com explains that Robret PRONOUNCED: RAH-bert (English), ro-BER (French), RO-bert (German), RO-bert (Dutch), RAW-bert (Polish), RO-byert (Russian), RO-beert (Russian). Robert comes from Germanic name Hrodebert meaning “bright fame”, derived from the Germanic elements “ hrod “fame” and beraht “bright”. Is it not clue to Raw-Bharat? Younger brother of Ram? England’s first king “EGBERT OR ECBERHT” (825 A.D.) also carry these elements. Marovingian kings also holding this name tradition. King Sigebert and Dagobert belonged to Marovingian Dynasty.
Link to behindthename.com

The Robertians, or Robertines, were a prominent Frankish predecessor family centered in the Western Frankish Kingdom, West Francia and fathers of what became the Capetians, holding power through the whole period of the Carolingian Empire and between 888-988 were the last Carolingian Kingdom existing. 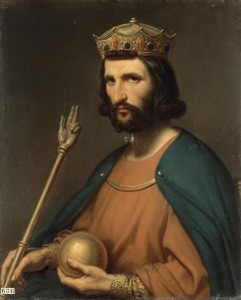 Hugh Capet is known as the “last Frankish king” and the first king of France.. He is the founder of the Capetians, the family that (via the spin-off dynasty, The Bourbon dynasty of Spain and France) ruled France until the founding of the Second French Republic (1848–1852) — save during the French Revolution and Napoleonic wars from 1792 to 1814/1815) and is still ruling Spain and Luxemgourg.
Bharat of Ramayana

Bharata was the second of the four sons of Dasaratha. His mother was the daughter of Kekeya kingdom.. The Ramayana describes the four brothers as loving and devoted to one another. He was also the husband to Mandvi, daughter of King Janaka”s brother Kushadhvaja and thus a cousin of Sita, who was wife of Ram. They had two sons, Taksha and Pushka. Taksha founded Taxsila and Pushka founded Pushkalavati (present day Peshawar). It is evident by the Uzbek capital city’s name Tashkent that it is derived indeed from the word “Taksh-khand” named after Bharat’s son Taksh. 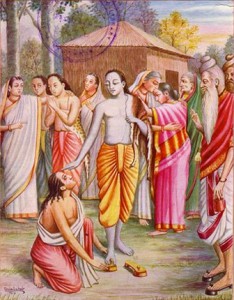 Bharata was away from Ayodhya when Rama went into exile. When he learned of the exile, he was mortified. He severely reprimanded his mother, and immediately declared his intention of bringing Rama back from the forests, and if need be, of serving out his exile for him.

At last he agreed to govern Ayodhya, not as its ruler, but as Rama’s representative. The people supported Bharata, as he became the ‘king’ of Kosala and Ayodhya, but Bharata himself placed Rama’s sandals at the foot of the royal throne, and neither sat upon the throne nor crowned himself.
In old age when Rama decided to retire, Bharata and Shatrughna joined him. When Rama walked into water of the river Saryu, he transformed into his eternal and original Mahavishnu form, which Bharata and Shatrughna walked into the river also and united with him. 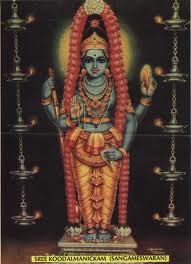 Bharat temple
Koodalmanikyam Temple or Kudal Manikkam Temple is an ancient Hindu temple in Irinjalakuda, a small town in Trissur district, Kerala, India. Koodalmanikyam Temple has two unique features: the temple holds the deity of Bharata represented as a sage than Bharata as the prince; and it is also the only temple in India dedicated to the worship of Bharat (Lord Sangameshwara), the brother of Lord Rama. The temple is one of four in Kerala that form a set called Nalambalam, with each temple dedicated to one of the four brothers in the Ramayana epic: Ram, Bharat, Lakshmana and Shatrughna.

Major General Robert Clive, 1st Baron Clive (29 September 1725 – 22 November 1774), also known as Clive of India, was a British officer who established the military and political supremacy of the East India company in Bengal. He is credited with securing India, and the wealth that followed, for the British crown. Togather with Warren Hastings he was one of the key figures in the creation of Beritish India.

Clive was the first of the “soldier-politicals” as they came to be called, who helped the British gain ascendency in India by installing rulers beholden to himself and to Britain. Clive’s notoriety and fame lay principally in his political and military conquest of Bengal and Awadh..!
Early in 1756, Siraj ud Daulah had succeeded his grandfather Alivardikhan as Nawab of Bengal. In June Clive received news that the new Nawab had attacked the English at Kasim Bazar and shortly afterwards on 20 June he had taken the fort at Calsutta… 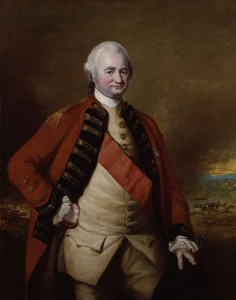 The whole hot season of 1757 was spent in negotiations with the Nawab of Bengal. In the middle of June Clive began his march from Chanderanagar, with the British in boats and the sepoys along the right bank of the Hoogly river. His whole army amounted to 1,100 Europeans and 2,100 sepoy troops, with nine field-pieces. The Nawab had drawn up 18,000 horse, 50,000 foot and 53 pieces of heavy ordinance, served by French artillerymen. On 21 June 1757, Clive arrived on the bank opposite Plassey, in the midst of the first outburst of monsoonal rain. On 23 June, the engagement took place and lasted the whole day, during which remarkably little actual fighting took place. Gunpowder for the cannons of the Nawab were not well protected from rain. That impaired those cannons. Except the 40 Frenchmen and the guns which they worked, the Indian side could do little to reply to the British cannonade (after a spell of rain) which, with the 39th Regiment, scattered the host, inflicting on it a loss of 500 men. Clive had already made a secret agreement with some aristocrats in Bengal like Jagat Seth, Mir jafar etc. Siraj ud Daulah fled from the field on a camel, securing what wealth he could. He was soon captured by Mir Jafar’s forces, and later executed by the assassin Mohammadi Beg. Clive entered Murshidabad, and established Mir Jafar as Nawab.

Battle of Buxar(1764)
only seven years later in 1764 at the Battle of Buxar, where Sir Hector Munro defeated the combined forces of the Mughal Emperor and the Nawab of Oush in a much more closely fought encounter. in October 1764. A hotly contested battle resulted in victory for the British. As a result of this triumph, in 1765, Robert Clive signed the Treaty of Allahabad with the Nawab of Oudh and Shah Alam II. The treaty effectively legalized the British East India Company’s control over the whole of Bengal and Awadh.
We have to consider this event as historical evidence. Yes Awadh was made free by Robert Clive, Surpringly some legends says that he worshiped Goddess Kali in Culcutta ,after victory in Battle of Plassey.

War is never faught for wealth only. Without Determination fighters can not fight. It is a matter of life and Death , and life is more precious than weath. We also never remember or pay tribute to 2100 Indian Sepoy worriors, who faught alongside Robert clive in battle of Plassey. Robert clive British officer as well as those unknown Indian warriors made free Ayodhya.
yes we never remeber those Indian warriors who faught alondside Robert Clive to make free Ayodhya. For second time I want to remind you that No war can be faught without detrmination.No warrior can come to battlefield for wealth…… because war is matter of life and death. I salute those wise unknown Indian warriors who joined Robert clive to make free Ayodhya.

Surprising, nobody from them ever claim that they made free Ayodhya…….!