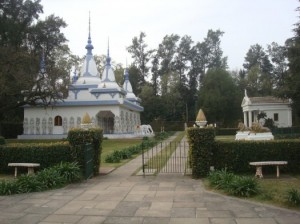 Few in India would know about the city of Hastinapur in Argentina. People here too pay obeisance to Indian gods and the Pandava princes who ruled the Indian city by the same name thousands of years ago.  Hastinapur was the capital of an ancient Indian kingdom. The throne of this kingdom was the prize over which the Kurukshetra war was fought between the Kauravas and their cousins, the Pandavas. But far away in place and time exists its namesake.Spread across 12 acres near the Argentine capital of Buenos Aires, Hastinapur houses about a dozen temples of Indian gods.Statues of deities are placed in a flower garden, some stand on pedestals, while some hang on the side walls and pillars. Lord Ganesh, Krishna, Surya, Narayana and Shiva have their own temples, and the Pandavas too have one.

The Hastinapur Foundation, which runs the place, was founded by Argentinian author Ada Albrecht in 1981. Albrecht introduced Indian philosophy in the country and became a guru for Argentinians seeking wisdom. She also wrote a number of books such as “The Saints and Teachings of India” and “The Teachings of the Monks from Himalayas”.

Link to Hstinapur in India

Link to Hastinapur in Argentina