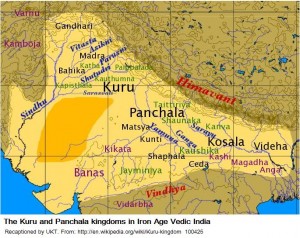 Kunti kingdom
As per the epic Mahabharata, the Kunti Kingdom was the kingdom of Kuntibhoja, one of the prominent kings among the Bhoja Yadavas.
Kunti, the mother of Pandavas and the first wife of Kuru king Pandu, was the adopted daughter of the king Kuntibhoja. Her given name was Pritha and she was a sister of Vasudeva, the father of Vasudeva Krishna. The Kunti kingdom was neighbour to the Avanti Kingdom. It was probably to the north of Avanti.
Surrounding the kingdom of the Kurus, are, many countries beautiful and abounding in corn, such as Panchala, Chedi, Matsya, Surasena, Pattachchara, Dasarna, Navarashtra, Malla, Salva, Yugandhara, Saurashtra, Avanti, and the spacious Kunti-Rashtra .
The Kuntis possessed of great prowess in battle, endued with great energy and great might, have been slain in fight by Bhishma, with all their kinsmen and advisers.
Kunta culture 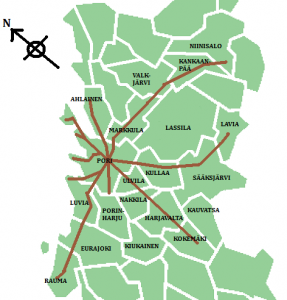 Kunta Culture, with its roots in Swiderian culture is a mesolithic hunter-gatherer communities of the Baltic forest zone extending eastwards through Latvia into northern Russia dating to the period 8000–5000 BC by calibrated radiocarbon dating. It is named after the Estonian town of Kunda, about 110 kilometres (70 mi) east of Tallinn along the Gulf of Finland, near where the first extensively studied settlement was discovered on Lammasmäe Hill and in the surrounding peat bog.
Kunta temple in Gajapati district
There are three temples on the top of the mountain Mahendragiri. These temples are named after the Pandava brothers and their mother Kunti.
The three-day Gajapati Utsav held evry year. A flaming torch from the Kunti temple situated on the peak of the Mahendra Mountains under the Rayagada block are being sent separately to the seven blocks of the Gajapati district.
This entry was posted in photo Gallery. Bookmark the permalink.