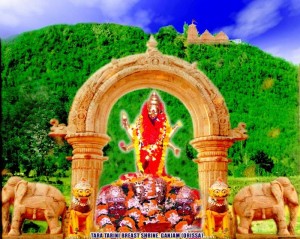 Tara Tarini Sthana Peeth is situated on the holy Taratarini hill (Purnagiri) at a distance of 30 km from Berhampur in the state of Orissa, India. The Twin Goddesses Tara and Tarini are worshiped as manifestations of Adi Shakti. The Taratarini Hill Shrine is one of the oldest pilgrimage centers of Mother Goddess and is one amongst the four major ancient Shakti Peethas in India.

The murti at the Tara Ma mandir in the village of Tarapith, a highly important Tantric site for Bengali Shaktas (and highly contested as to whether or not it is truly a Shakti Pitha; scholarly evidence points towards no), is mostly covered by Garlands of flowers. There are two Tara images in the sanctum. The stone image of Tara depicted as a mother suckling Shiva – the “primordial image” (seen in the inset of the fierce form of the image of Tara) is camouflaged by a three feet metal image, that the devotee normally sees.
There is Tara hill in Ireland too. Four tribes of Tara dwelled there. UI Dron was one of the four tribes of Tara. Is it not surprising?