“ Let us now analyse the word or name MANU .Orientalists and their dictionaries tell us that the “Manu” is from the root man, “to think” ; hence the “thinking Man”…. Each of the Manus , therefore , being the special God , the creator and fashioner of all that appears during his own respective cycle of Being or Manvantara. Fohat runs the manus’ errands and cuses the ideal prototypes to expand from within without – viz., to cross gradually ,on a descending scale , all the planes from the noumenon to the lowest phenomenon , to bloom finally on the last into full objectivity – the acme of illusion , or the grossest matter. “ 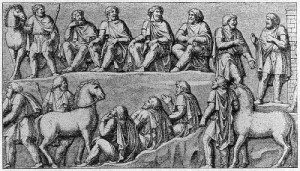 Germanic tribes reached Danube in 500 BC.

Migrating Germanic ( Teutonic) tribes spread throughout Europe in late Antiquity (300-600 B.C.) and in the Early Middle Ages. The migrant Germanic tribes call themselves the Sons of Mannus, Istvaeones, Irminones, and Ingvaeones.
It is very interesting that they in europe use “ Manu” in its plural form – That is “Mannus”.It is more interesting to note that the names of the Germanic tribes telly with the account of our Ancient History of BHARATVARSHA.
Now let us telly the facts about Germanic tribes with the account of ancient Indian history. In the book – “History of Ancient India: From 7300 BC to 4250 BC” writen by J.P. Mittal . Author states in his bool that….. 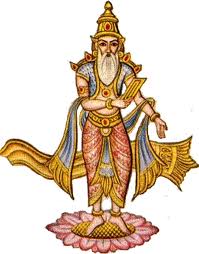 – “ Manu prescribed the rules for the colonies and for its residents. There had been fourteen manus.Swayambhu Manu was the first Manu. The practice of appointing satraphis began on Bhadarva shukla panchmi (Rushi pancham).During the reign of every fourteen Manu there was the Indra. “(p-18) 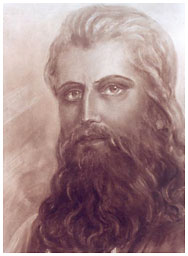 Yes Mittal says that “Vaivaswata Manu was son of Vivswana Manu. After the floods he came down the Himalayan mountains and founded a new colony on Kartika shuklas Navami (November –Satyugadi) in northern plains and named it Ayodhya (about 6000 B.C.) .Vaivaswata Manu was the first builder of the city , its first king , the first tax receiver and the punisher of criminals according to rules. (p-90)

Conclusion: The account in Indian texts says that there were 14 manus, so use of Plural form that is “sons of Mannus” for Germanic tribes convey the sense.
Now let us look at further facts about Germanic tribes.

The Germanic peoples (also called Teutonic in older literature) are a historical ethno-linguistic group, originating in Northern Europe and identified by their use of the Indo-European Germanic languages, which diversified out of Common Germanic in the course of the Pre-Roman Iron Age. The descendants of these peoples became, and in many areas contributed to, ethnic groups in North Western Europe: the Finland-Swedes, Germans, English, Dutch, Swedish, Flemish, Danish, Norwegians and Icelanders among others.
Migrating Germanic peoples spread throughout Europe in Late Antiquity (300-600) and the Early Middle Ages. Germanic languages became dominant along the Roman borders (Austria, Germany, Netherlands, Belgium and England), but in the rest of the (western) Roman provinces, the Germanic immigrants adopted Latin (Romance) dialects. Furthermore, all Germanic peoples were eventually Christianized to varying extents. Europe’s Germanic peoples, such as the Franks, Saxons, Vandals, Angles, Lombards, Burgundians and Goths, transformed the Roman Empire into Medieval Europe. Today Germanic languages are spoken through much of the world, represented principally by English, German, Dutch and Scandinavian.
By the 1st century CE, the writings of Caesar, Tacitus and other Roman era writers indicate a division of Germanic-speaking peoples into tribal groupings centred on:

The Sons of Mannus, Istvaeones, Irminones, and Ingvaeones are collectively called West Germanic tribes. In addition, those Germanic people who remained in Scandinavia are referred to as North Germanic. These groups all developed separate dialects, the basis for the differences among Germanic languages down to the present day.
The division of peoples into West Germanic, East Germanic, and North Germanic is a modern linguistic classification. Many Greek scholars only classified Celts and Scythians in the Northwest and Northeast of the Mediterranean and this classification was widely maintained in Greek literature until late Antiquity.
They also have an aboriginal Pictish heritage (one of the founding peoples of Scotland), and unlike the Faroes and Iceland, many prehistoric remains such as brochs and stone circles can be found there .
Now question remains that is there the word “sons of Mannus” mentioned for Germanic tribes and Manu of Ayodhya have any connetion or not? Account of Mittal’s book also helps us to solve this mystery. 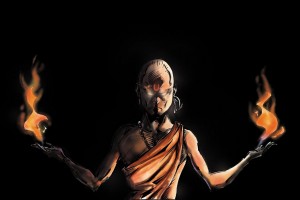 Avasthya - who came from Amarawati to meet Manu

Mittal mentions that –
– “ Manu thought that he should do something, otherwise the Deva’s culture would vanish from Ayodhya.After sometime Narada came to Ayodhya from Amaravati ,near the Mansarovar lake in Tibet. Manu told Narada that after the floods lawlessness is spreading fast and it was difficult to follow Deva’s culture. Everyday he had to bear the aattacks from other tribes.If some Devas could come from Amaravati to Ayodhya he would be able to discipline the society. On the return Narada told to Indra about the problems faced by Manu. Indra sent Buddha , the son of Chandra with some Deva to Ayodhya(p-92)
Mittal further mentions that…

— “ One day Manu was training some youths in the use of weapons. A man called “ Avasthya “ came from Amarawati . Manu thought of a plan. He called a meeting with Awasthya so that new rules could be framed for the society.“(p- 93)

Yes, Mittal says that there was lawlessness and chaos in the society after great flood. Manu was anxious to save Deva’s culture. He framed new rules for society after meeting and consultation with “Avasthya”, a man who came from Amaravati.

It implies that “ AVASTHYA” also existed before flood and he was also rescued in great flood alongwith Manu.Avasthya had knowledge of pre-flood vedic or Deva’s culture.

“Avasthya” the holy character of Deva’s culture can unfold the mystery of connection between (Manu;s sons) Germanic tribes and our “Manu” , the founder of Ayodhya.

In Celtic Druid religiuos tradition “O’VATEIS” was playing very important role. o’vateis were pillars of religious as well as social structure. “Vatici ” celtic tribe was pulling ancient religious tradition of Europe..Vatican in Rome derived its name from Vatici tribe . “Vates” is a short form for the word “ o’vateis”. The very word “vates” leads us to Vatican. It implies that “o’vateis” is religiuos head of Europe.

CONCLUSION : Manu of Ayodhya “ and “ sons of Manus “ in europe both were anxious to save Deva’s culture . O’vateis , Avesta (Religious Book of fire worshiper Parsi tribe)and Avasthya is same spiritual force. Manu of Ayodhya and sons of Manus(Germanic tribes) taking religious guidance from the same devine force. ….!
European mythology use plural form “mannus” . Does it convey the message of previuos 13 manus, who reined before our 14th Manu , who founded Ayodhya after flood (jalpralay) ? If so ,then the detail of European mythology supports our indian shashtra and literature too . Our Shashtra mentions that there were 13 Manus reined in Himalaya during vedic period.
wikipedia’s version abuot o’vateis explains us that …. 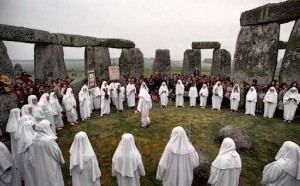 ……According to the Ancient Greek writers Strabo, Diodorus Siculus, and Poseidonius, the vates ( o’vateis ) were one of three classes of Celtic priesthood, the other two being the druids and the bards. The Vates had the role of seers and performed sacrifices under the presidence of a druid. Celtic vates is continued by Irish fáith “prophet, seer,” and ofydd in Welsh.
Strabo, writing in the 20s CE, who declared that amongst the Gauls, there were three types of honoured figures: (1)the poets and singers known as bardoi ( the word do not remind you fo great poet chand Bardai?) , (2) the diviners and specialists in the natural world known as o’vateis (Ahasthya?) , and (3) those who studied “moral philosophy”, the druidai (Druv?).
Where is our Avasthya?

Now let us check further facts about different Germanic tribes and their Origin in details one by one.

………Chapter -2 will continue. second part will be posted shortly.