South Korean President Lee Myung –bak was the chief guest at Republic Day Parade -2010.Myung-bak visited India at the invitation of President Pratibha Patil from January 24 to 27, 2010.President Lee accompanied by his wife Mrs. Kim Yoon-ok and a high-level delegation. 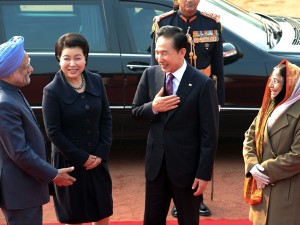 Newspaper report reported that Kim, wife of South Korean President Lee Myung-bak, is a descendant of one of royal families in Ayodhya dating back two thousand years. The Korea Times had reported quoting the presidential office.
“The office said Kim is a descendant of Heo Hwang-ok, a princess who travelled from an ancient Kingdom in Ayodhya, India , to Korea,” the newspaper reported.
It has been an affair that resurfaced after a lapse of almost 2000 years in the year 2001. Mayors of Ayodhya and Kim-Hae city in South Korea had signed a Sister City Bond in March 2001.
On the picturesque banks of river Saryu in the holy city, one will find a monument in memory of an Ayodhya princess who is believed to have ‘mothered’ a dynasty in South Korea.
The clan that descended from the Ayodhya princess Huh and South Korean King Suros, today known as Kim-Hae-Kim clan, has a little over six million Huh descendants in the Republic of South Korea.
Link for more facts
The Kim Hae Kim clan has countless illustrious members including many presidents and premiers.
The memorial site in Ayodhya has become a place of pilgrimage for members of the clan.
The origin of the historical ties can be traced back to the middle of the first century AD. According to Sam Kuk Yusa, the ancient history of Korea, Queen Huh, wife of legendary King Suro, who founded the Karak Kingdom, was born in Ayodhya.
Yes South Korea reminded us of ancient ties between Ayodhya and South Korea and we accepted that that historical ties.
It is news item published in news paper.

While the present Korean rulers are said to be the 72nd generation after Kim Suro, the Ayodhya princess’ descendant, Bimlendra Mohan Prasad Mishra, continues to be referred to as ‘Raja saheb’, or sometimes more intimately as ‘Pappu bhaiyya’, in India. The former ruler of Ayodhya was invited by South Korean Prime Minister Kim Jong-pil for the annual memorial ceremony of King Suro. The South Korean government has also installed a monument in Ayodhya in their former queen’s memory.

While Koreans regard Mishra as a descendant of Kaya royal family, Mishra traces his roots back to Bhojpur’s landlord, Sadanand Pathak. With his eye on politics, he is desperate to play down his royal lineage. Ask him for a photograph in his royal attire, and he flatly refuses. Ask him about his extravagance and he insists that he is a commoner.
Link to more facts.

Surprisingly ,there is Korea princely state in North Chhatisgarh. Balands were rulers of KOrea and their Capital was Sidhi or Surguja.Temple of Goddess Mahamaya at Kudergarh in Surguja district Built by Balands. There is Baland Pahar there.Prince of Kara dynasty of KOrea married princess of Ayodhya. Gaya confederation of KOrea will say you further history.

Link to provinces of KOrea

Thereafter Konch Kol ruled the state. Their capital was Koreagarh.

Link to KOrea district of Chhatisgarh

Link to History of KOrea district history will say you evrything..evrything.

Ya South Korea and Ayodhya connection is reality. It is high time to know about Gogureyo , Baekje and Silla Kingdoms of Korea. There is Gangnan district in south Korea.

Link to Three Kingdoms of Korea.